To Jump or Not to Jump: A Deer Dilemma

Wildlife and human interactions and conflicts have increased as humans have encroached into animal habitats. Tracks of uninterrupted wilderness have been broken into smaller pieces by roads, buildings, and development of large, agricultural landscapes. Though some species have seen drastic declines in population numbers because of this, others continue to flourish and prosper. However, increased numbers of wildlife also increases the chances of negative interactions with humans. When humans and wildlife do not get along, it is vital to understand what causes the problem when trying to find a solution.

White-tailed deer (Odocoileus virginianus) are one of the leading wildlife species that causes damage to human property (6, 8). Deer cause damage on roadways, at airports, potentially spread diseases to and amongst domestic livestock, and damage natural vegetation plots in national parks to name just a few of the conflicts with humans. Conflicts between humans and deer have been the result in rapid increase in total deer populations over a very short period of time. In the 1900s, white-tailed deer in the United States numbered close to 350,000 and by the 1990s that number jumped to over 26 million deer (6). Oftentimes large numbers of deer are found within a small place, leading to high population densities. When large numbers of deer are in a small space, it can put a strain on native habitat and cause deer to search out new places with better access to food and water. The largest number of deer complaints come from areas where deer are in high densities with low natural forage availability, like near small towns and farms. 93% of farmers who report large numbers of deer and large amounts of damage on crops report wanting to reduce deer numbers. In low deer population areas, that number drops to 50% (9).

Deer are foraging herbivores. They travel daily in the search of different shrubs, grasses, and forbs to ensure they eat enough food to sustain themselves. In locations of high densities, deer compete for food not just with other deer, but also with other herbivores (elk, rodents, etc). Agricultural lands, from large commercial operations all the way to small, private gardens, are all sensitive to deer damage due to easy accessibility combined with increased foraging opportunities. Croplands offer deer easily obtained food without some of the plant defenses (such as thorns) and toxins found in wild, uncultivated plants. Deer will eat anything from corn and carrots, grains, fruit crops and even ornamental flowers.

Different crops have different susceptibilities to foraging deer; from their distance to forested areas to the plants’ growth stage. Small crops with large, adjacent forest patches are more susceptible to damage by deer than larger fields farther away from patches (8). Damage in many agricultural fields is highest when fields are near forested habitat. Forests provide deer with a secure hiding location that is close to a field with an easily accessible food source. Losses are greater near the boundary where it is easier for deer to quickly escape back into the safety of the forest when deer are startled, regardless of an actual danger or not. However, this does not prevent deer from foraging further into a field, especially if the desire for food outweighs the need for safety.

Crop losses due to foraging deer exceeds all other damage caused by other wildlife species to humans (9). In 2001, $944 million in agricultural losses were due to wildlife damage (2). Of this, deer alone caused 58% of the overall damage to field crops and 33% of the damage to vegetable, fruit and nut operations (2). In New York, average orchard crops sustain $15,000 in damage each year (9). Damage is cause in other countries as well. In Canada it is estimated that deer foraging on commercial carrot growing operations costs $100,000 in Canada every year (5). The economic impacts of deer on agriculture can be costly to those who are invested. The impact of the economic loss affects farmers differently. Smaller, private operations cannot afford as easily to make up for the damage caused by foraging deer. What is needed by farmers and resource managers is a way to prevent damage before it occurs.

How to Reduce Damage

Multiple methods have been used to try and prevent deer from grazing in agricultural fields, often with mixed results. Propane exploders, taste and scent repellents help curtail some damage but are not efficient for large operations. This is mainly due to the cost of these methods when using them when compared to actual losses from damage (3). These types of deterrents are more cost efficient for small, private gardens and yards. Specific, management programs that use lethal methods to control population numbers can be an efficient tool but are often hard to use on agricultural land that is leased from the government. Removal programs also are difficult if agencies do not have local, public support. Habitat modification, live trapping and relocating are also used by managers in attempts to change deer behavior to prevent deer from eating crops. Other repellents include hanging soap and bags of predator hair from lines.

Fencing is considered to be the best tool to keep deer out of a designated area (4). A fence provides either a physical and psychological barrier for animals, or a combination of both (9). For fencing to be effective, it has to be designed specifically to keep deer out. Livestock fences (stockade style, post and rail, multi-strand barbed wire, etc.) do not effectively keep white-tailed deer out. The types that do work are classified as either nonelectric or electric fencing. 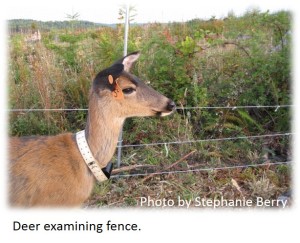 Woven or welded wire, chain link and mesh fences are all nonelectric, physical barrier fences (no crawl spaces or gaps to squeeze between). The effectiveness of the fence is completely determined by how it is perceived by a deer. Deer have been seen to jump as high as 7 feet and can crawl under an obstacle as long as there is gap big enough for them to fit under (6). A space as small as 9 inches is plenty of space for an adult deer to crawl under if there is enough motivation (9). Without proper, regular maintenance deer will also take advantage of any hole in a fence large enough for them to pass through easily.

Nonelectric fences can last many years and have low maintenance associated with them. However, they are expensive. Costing anywhere from $6 to $ 15 per foot (9). For large, commercial operations this cost may be easier to afford but is often not feasible for small operations or personal gardens. And though these types of fences might last long, they are not easily moved. These large-scale fences can also block views from landowners, sometimes making them less desirable. This is especially true in more suburban settings with small, private gardens.

Electric fencing is both less expensive and easier to setup. Depending on the style of fencing, the cost of electric fences are no more than $3 per foot (9). Electric fencing can be setup and taken down quickly, allowing for greater flexibility and movement. This is especially beneficial for agricultural operations that rotate crop and field locations. An electric fence acts as a psychological barrier for deer. Typically only 2-4 strands are needed, depended on the desired level of control when trying to deter deer from a specific area. The height required is not as great as nonelectric fences. With the correct voltage delivered when a deer first touches the fence, the deer will attribute the pain from the voltage to touching the fence and will then avoid it in the future (1). Instead of jumping up and over to avoid getting shocked, deer will retreat backwards away from the source of the pain. Electric fencing is also less conspicuous than more standard fences.

The question becomes how effective are fences, specifically electric? Electric fences can reduce the number of deer intrusions by over 90% when the power is maintained at a high voltage (1). Deer require a higher voltage than domestic animals and livestock. A deer’s hollow hair insulates against harsh weather conditions, but also helps insulate against electricity. Cattle and horses can be contained by electric fences emitting 2000-3000 volts whereas deer and other wildlife species need levels greater than 4000 volts (7). Once a deer receives the initial shock, they quickly learn to avoid touching the fence again. Deer also learn from watching other deer getting shocked. In a group, it only takes one individual actually touching an electric fence and retreating for the rest to follow and also retreat (9).

What Motivates Deer to Keep Away?

Animals will test fences typically for two reasons: to get food or join other animals (7). Hunger is an especially strong motivation. In areas with high numbers of deer, the easy access to farmers’ crops will increase the likelihood a deer testing fences. Knowing this and maintaining a constant charge on electric fences is vital for keeping deer out of fields. When pairing a visual and auditory warning with a shock will immediately cause deer to change behavior and not test a fence. Unfortunately, once the shock is removed the visual and auditory cues alone are not enough to keep deer out. Deer shocked once will again test and get through fences to reach food when there is no negative consequence (3). It has been observed that some deer will change how they approach fences that might be electrified such as quick bursts past warning cones similar to dogs who burst through underground electric fences. In the same way dogs are moving more quickly through the fence to limit the length of time the shock is administered, so too will deer try to reduce the chances of getting shocked by moving more quickly.

Searching for food, escaping predators or hunters, seasonal habitat changes and breeding season all influence a deer’s behavior. When allowed to approach a fence on its own, a deer will tend to approach with caution, especially if it has been shocked before. There is a perceived threat associated with the fence when deer have already been shocked. Even if a fence is low and easily jumped, under normal circumstances the deer will walk away. However, high levels of stress caused by a human or animal predator combined with flight will lead a deer to jump any type of fence, electric or not, if the fence falls along the escape route.

Even with fences, completely preventing deer from eating in agricultural fields is a difficult task to accomplish. Motivation of a deer will influence how much effort an individual will exert to test a fence (1). Understanding the needs and foraging behavior of deer with this are tools to use in combination with fencing to mitigate deer damage to agricultural crops.

Stephanie Berry is a graduate student at Washington State University School of the Environment who studies deer nutrition and behavior.